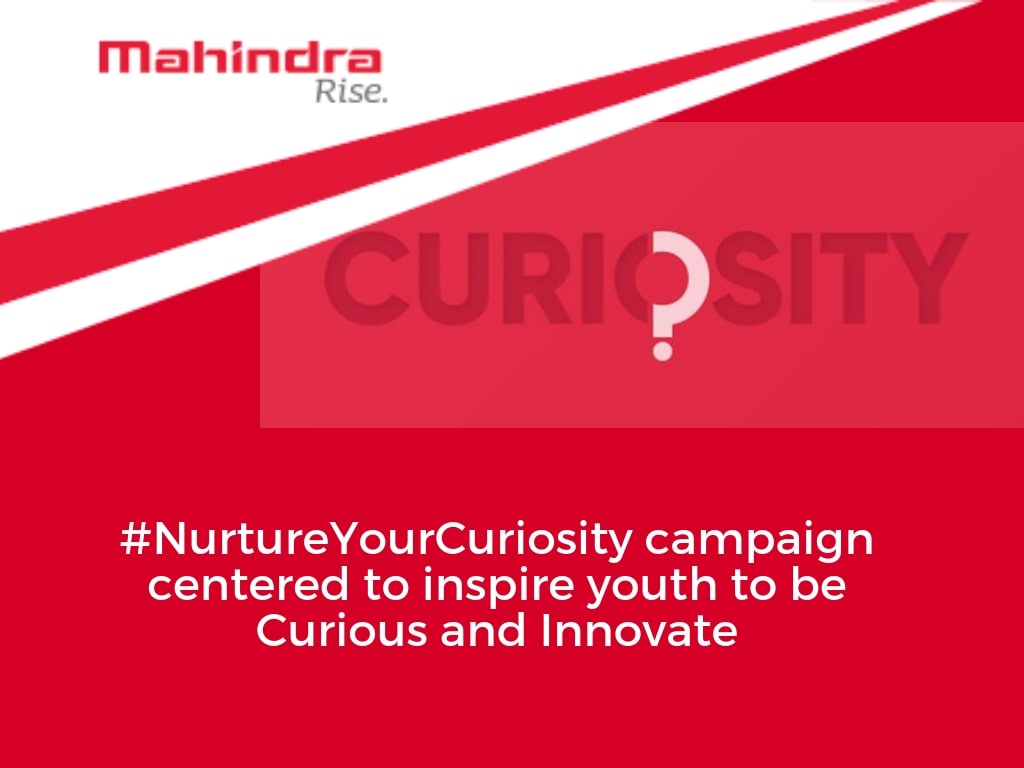 Mahindra Group, the famous Indian Automobile brand propelled its most recent campaign #NurtureYourCuriosity on 3rd July. The reason of the campaign is to create interest in the brains of the viewers through the ad film. It urges watchers to be imaginative by incorporating the campaign with a curiosity test that keeps the customers connected with while making them push the campaign via web-based networking media.

Vivek Nayer, Chief Marketing Officer, Group Corporate Brand, Mahindra & Mahindra Ltd, says “The focus is primarily going to be on digital and social media as we want this to be a social mandate. We want people to engage in conversations. We want people to start discussing through the ad film ‘curiosity’ as a concept.”

The campaign (syndicated with a Harvard Business Review test) and microsite went live July 3 and will last for a period of six weeks. The prime target audience of the campaign are millennials who are very active on social media. The fundamental requirement for the world to be better according to Nayer is that people should ask the right questions.

He says, “We need to question stereotypes and challenge status quo. People who are curious keep finding solutions to problems. Curious people are the ones who will bring a change in the world.”

Drawing from this insight the campaign #NurtureYourCuriosity was created because curiosity is the fundamental need if people want to come together to solve the world’s problems. Nayer believes that the questions the small girl asks her elders in the ad film will help spark conversations at dinner tables. “We at Mahindra nurture our curiosity. We want people to get inspired, motivated and want them to nurture their curiosity. By just Mahindra saying this won’t help the consumer get inspired. They need to know first what their curiosity level is.

That is why we syndicated the curiosity test from the Harvard Business Review”, remarks Nayer.  “The #NurtureYourCuriosity campaign will be strategically amplified on digital and social media platforms with content showcasing examples of innovation taking place within the Mahindra Group. The film will be promoted across YouTube, Facebook, Twitter, LinkedIn and Instagram.”

Nayer says that the Mahindra Rise brand philosophy is about driving positive change in the minds of their customers. “We believe that driving a positive change should not only be limited to our customers but the rise philosophy is to create an impact at large. It is about bringing a change at a macro level for people who deal with us. The world will be a better place not only when we do good but encourage others to do so,” he adds.

In line with this philosophy, the brand created two path-breaking campaigns #LadkiHaathSeNikalJayegi and #RiseAgainstClimateChange.

Speaking about the success of these campaigns Nayer says, “We targeted people at scale. Both these ad films video consumption reached 29 million views. The other metric that the brand Mahindra tracks is how many people are engaging with our posts. Are they liking the campaigns we put up, their engagement and their comments. During the #LadkiHaathSeNikalJayegi campaign people commented on socials that they were in tears while watching it. The issue was relatable, up close and personal.”

Nayer says he wants to encourage millennials to ask questions and challenge status quo, that is the only way we will progress. Also, “this ad film will be under the creative expression ‘#Futurize’. When our brand talks about technology or innovation to our customers we talk about ‘#Futurize’ as an expression.

When we talk about CSR work about climate change and sustainability it will be under ‘#RiseForGood’ category. We hope that over time with the stories we tell we get to own these themes and make them brands in itself,” he concludes.

A good logo is a need for all business.It's...
Read more