The bottles of the Pepsi’s products could become “greener” with an announcement. it has developed the world’s first polyethylene terephthalate (PET) plastic bottle made entirely from plant-based, fully renewable resources including switch grass, pine bark and corn husks. The PepsiCo’s “green” bottle is 100% recyclable and far surpasses existing industry technologies.
“PepsiCo is in a unique position, as one of the world’s largest food and beverage businesses, to ultimately source agricultural byproducts from our foods business to manufacture a more environmentally-preferable bottle for our beverages business,” said PepsiCo Chairman and CEO, Indra Nooyi.
In the future , the company expects to broaden the renewable source used to create the “green” bottle to include orange peels, potato peels, oat hulls and other agricultural by products from its business.
Over 60 percent of the world’s petroleum-based PET production is used as polyester for textile applications, while bottle production – usually for soft drinks – accounts for around 30 percent of global PET demand. 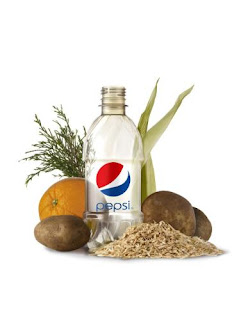 The plant-based bottle isn’t the first effort by PepsiCo to move towards more environmentally sustainable packaging. Its Frito-Lay division was also responsible for the world’s first fully comfortable bag made from plant-based polydactyl acid for its SunChips snacks in the U.S. and Canada.
PepsiCo says it will pilot production of the new bottle in 2012 and upon the expected successful completion of the pilot intends to move directly into full-scale commercialization.

Production in 2012
Combining biological and chemicals processes, PepsiCo has identified methods to create a molecular structure that is identical to petroleum-based Pet, which results in a  bottle that looks ,feels and protects its product identically to existing Pet beverages containers.
PepsiCo will pilot production of the new bottle in 2012.Upon successful completion of the pilot, the company intends to move directly to full-scale commercialization.

Suggested Creative Names for Air Cooler Brand The Summer is very tedious if you haven't planned for to make your...
Read more

Short is Sweet!There are many many brands exits in...
Read more
- Advertisement -