Brand News Nicorette : For Every Cigarette, There is Nicorette
Brand News

Nicorette : For Every Cigarette, There is Nicorette

Nicorette : For Every Cigarette, There is Nicorette 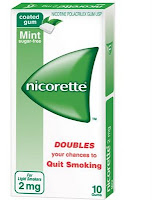 During that time, Swedish Royal Navy was facing an issue where their crew in submarines where increasingly becoming short-tempered because of the smoking ban inside submarines. Scientists discovered Nicorette while searching for an option to reduced the nicotine dependency of these marines.
Nicorette launched in the chewing gum form in India is a therapeutic nicotine-based gum which reduced the craving for nicotine among smokers. The gum when chewed releases nicotine in small quantities thus discouraging smokers from having cigarettes. The product has created a new system of Nicotine Replacement Therapy and has been claiming impressive record in helping people quit smoking.
The Indian market is especially lucrative for this brand by its sheer size. There are more than 275 million tobacco users in India. 24% of Indian males smoke and the use of tobacco in other forms like chewing tobacco is more widespread. This large size of cigarette users also results in large number of health issues and inturn large number of people who want to quit smoking. The demarketing of cigarettes by government and NGOs also increase the number of wannabe quitters.
Nicorette provides an infrastructure and a support system for those who wants to quit smoking. Rather it offers a pain-less way of quitting smoking by reducing the nicotine craving. The chewing of the gum releases just enough nicotine to satisfy the craving and over a period of time the user can reduce the intake of the quantity of gum also.
Nicorette is now availabe in two packs. The 4g pack is aimed at heavy smokers and is available on doctor’s prescription and the 2g pack is available over-the -counter. The brand is currently running a TVC and ads in digital media positioning itself as an effective solution for quitting smoking.
Nicorette has adopted the tagline ” Doubles Your Chances of Quitting Smoking “. The ads are catchy and the product makes sense for a person who genuinely wants to quit smoking. The ad shows a smoker wanting to quit smoking but the cigarette pack sticking to his hands ( symbolic of the nicotine addiction) despite his efforts to release it.
Nicorette launch also signals the arrival of new product categories into the Indian market. These products were existing in other developed countries for many years but the marketers felt that Indian market is not ready for such products. Now global players are becoming more confident of bring in their innovative offbeat products to India.

The enthusiastic Prime Minister of the world's biggest majority rule government, in addition to an intrepid and eminent explorer...
Read more

Diamonds have always enjoyed a special place among precious gemstones. India has the distinction of being one of the...
Read more

The car perfume product industry may be reduced in...
Read more

Are you about starting a Hospital/healthcare center? Required a...
Read more