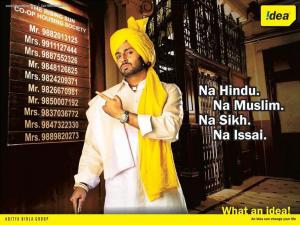 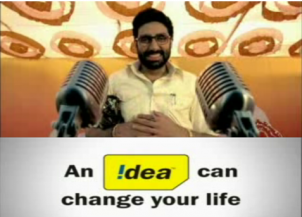 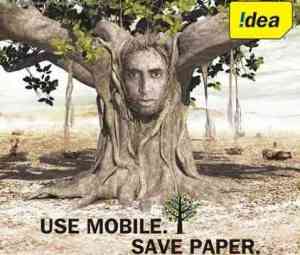 –
-Idea recently launched commercial took Indian audience by surprise when they bring up the idea of “Environment” and the role a common man a play in protecting it. The tagline “Use mobile, Save Paper” spotlights the ways in which a mobile phone can replace paper. The story revolves around a tree which gives a revolutionary idea to start using mobile phone for daily activities like newspaper, e-ticket instead of paper. It took their tally to 6 under ad campaign, “What an idea Sirji”.
After the failure of Copenhagen summit on “The hazards faced by planet due to global warming environment”, this idea from Sirji can act as a ray of hope.

-Last year Abhishek Bachchan, who is the brand ambassador of this ad campaign, won AD Campaign Award. This campaign started with a strong idea to stamp out caste system deep rooted in India. A protagonist playing ‘Surpunch’ pass a judgement that from now on nobody in the village will be called by his name but by a number. “Championing a world where no one suffers from disability of communication” was second in this series.

-Participate in governance was the next to feature in this campaign. This ad commercial was highly appreciated for its style of presenting central idea. It focused on the two way communication between people and person they elected to govern (in India popularly known as Netaji). It showed us a dream world where every individual has a say in governance and every vote counts. “Walk and Talk”, called people from all age group to walk for fitness, was the fourth in this list.
Idea expected “Ek idea per chal padega India!” from this advertisement. I don’t think so this slogan had any real impact on our way of living because we Indians are hard nuts to crack.

-This is a great initiative taken by Idea cellular to consider social awareness as the theme of their Ad campaign. It has a great impact on psyche of people. It is also a message to all the Ad agencies that how ad world can play its role in the welfare of the society. It is a slap on the face of those ad makers who believes that for selling products and to increase product brand value one has to have a female model wearing bare minimum clothes on her body (allowed by the censor board). We audience wonder what a girl in bikini is doing in cement commercial .They have taken the first step and now we have to make it a mass moment.
In the end I would like to conclude by saying: “What an Idea Sirji, Keep going …….Our country desperately needs such initiatives.”

Company Name- Siyaram Founder- Ramesh Poddar Siyaram is an Indian blended fabric and garment-manufacturer company which has changed the taste of...
Read more

Do you want to launch your own Baby Diaper Brand? The Baby Diaper business is not reached at its potential...
Read more

Amul -The Taste of India Company Name – Amul Founder - Verghese Kurien Amul is a name we have all grown up...
Read more

Logistic and courier section is one of the most...
Read more